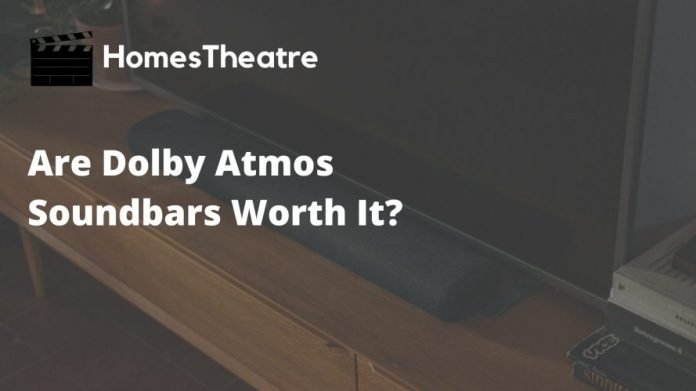 For a soundbar and surround sound altogether, Dolby Atmos aims to recreate 3D Object based sound which allows sound objects to be placed in three-dimensional space, this gives the feeling that the viewer is actually inside the movie/TV scene.

The thing with soundbars, they aim to recreate surround-sound performance with relatively little space compromise, in theory, you can just place them underneath your TV, and expect true surround sound.

With this type of technology, you should be able to recreate true theater-like sound performance in the comfort of your own home, but are soundbars actually competent at doing it?

What Is Dolby Atmos & How Does It Compare For Soundbars?

Dolby Atmos is a surround-sound technology created by Dolby Laboratories, and it’s pretty much the best surround-sound format you can use as of today.

Dolby Atmos does one thing really well, and that’s 3D sound, each object that generates a sound you see on the screen acts as a 3D object within your surround-sound environment.

And the way Dolby Atmos generates this 3D sound environment is by using height channels that previous surround-sound technologies do not use, for example, Dolby Digital.

Upfiring speakers should be installed directly into the ceiling and send soundwaves down directly to the listeners, these is called dedicated upfiring speakers, and they look something like this.

Now, where this stands with soundbars is that a Dolby Atmos will have at least two upfiring channels to drive speakers that will bounce soundwaves off the ceiling.

How Do I Know If My Soundbar Has Dolby Atmos?

Remember when I said that Dolby Atmos uses height channels? This is how we’re going to identify your Dolby Atmos soundbar. Soundbars will often disclose how many channels they use, and what surround sound technology they use.

Does 2.1 Soundbars Have Dolby Atmos?

Also, 2.1 soundbars actually do not produce surround sound, they use a technology called surround sound virtualization to fool your ears into thinking the sound is multi-directional.

2.1 soundbars aren’t actually recommended if you’re looking to build a home theater for this exact reason, they fall short to more powerful soundbars such as 5.1 soundbars.

Does 5.1 Soundbars Have Dolby Atmos?

5.1 soundbars also do not have Dolby Atmos technology due to there being no height channels, but 5.1 is a huge step up compared to 2.1 soundbars, this is because they don’t use surround sound virtualization.

5.1 soundbars will usually have three speakers placed onto the soundbar, two in each corner, and one in the center, and then they will have two rear speakers or satellite speakers for surround sound. And then the .1 represents the subwoofer.

What Soundbars Use Dolby Atmos?

With the addition of a height channel, an example of a Dolby Atmos soundbar would be a 5.1.2 soundbar system where 5 is the number of horizontal channels, 1 is the subwoofer, and the 2 are the vertical channels.

Dolby Atmos is a step up from 5.1 soundbars, they introduce height channels and sound objects. As previously stated, height channels are speakers that generate sound or bounce sound from the ceiling.

Sound objects are individual sources that are placed in an X, Y, Z coordinate-like system. Dolby Atmos is object-based, and Dolby Digital is speaker based.

With a 5.1 soundbar or surround sound system, the sound technology used is Dolby Digital or something similar which is a speaker-based system, this means the sound is assigned to speakers.

With Dolby Atmos, think of it like real life where each sound comes from a precise direction and can move freely in 3-dimensional space. A perfect example of this would be a helicopter.

With a Dolby Atmos soundbar, you should be able to hear a helicopter fly over you almost like it’s an object actually present in your room. So Dolby Atmos is able to bring movies and scenes to life giving them a more immersive feel.

Here’s a video that explains the science behind Dolby Atmos

How Does Atmos Work In A Soundbar?

If you just look at a soundbar, it’s obvious that it’s limited in terms of size, and there are no actual physical height speakers, so how can it possibly recreate a realistic Dolby Atmos experience.?

Just like a 2.1 soundbar emulates a surround sound experience, a Dolby Atmos soundbar will attempt to emulate height channels, and they do this by bouncing soundwaves off the ceiling allowing them to hit the listener.

Now you’re probably wondering whether this is realistic or not, there are a few things you need to consider when using a Dolby Atmos soundbar if you want to get the most immersive and realistic experience possible.

Since Dolby Atmos speakers are upfiring, you will need a flat ceiling to allow the soundwaves to properly propagate off the ceiling. A non-flat ceiling can cause the sound to bounce in unpredictable directions causing a non-immersive experience.

Also, you need to ensure that your content is actually Dolby Atmos compatible, this allows for the best surround sound experience possible. If the content is not compatible with Dolby Atmos, then the soundbar will try its best to recreate something plausible.

Are Dolby Atmos Soundbars Worth It?

Suppose you want the best experience out of your soundbar in terms of immersiveness with the surround sound capabilities to encapsulate you in each and every movie scene, then yes. In that case, Dolby Atmos soundbars are worth it.

A soundbar without Dolby Atmos will only have surround sound in the horizontal direction(left, right, and rear), there’s no height dimension which means you’re losing out on a huge part of surround sound and immersion, so we believe Dolby Atmos soundbars have their place in home theaters.

But Dolby Atmos isn’t cheap, the technology will definitely come with a considerable price difference compared to their non-Dolby Atmos counterparts.

How Much Does A Dolby Atmos Soundbar Cost?

A Dolby Atmos soundbar can cost between $300 and upwards of $2000, so while you can pick up some fairly affordable options, the best will unfortunately cost you a considerable amount of money.

An entry-level Dolby Atmos soundbar such as the LG SPD7Y will cost around $399. It is a 3.1.2 channel soundbar that supports the following surround sound formats – Dolby Atmos, Dolby Digital, Dolby Digital Plus, Dolby True HD.

A high-end Dolby Atmos soundbar such as the Samsung Q990B will cost around $1649, but it’s an 11.1.4 channel soundbar that supports – Dolby ATMOS, Dolby TrueHD, Dolby Digital Plus, Dolby MAT (*ATMOS Music).

How Do They Compare To Non-Dolby Atmos Soundbars

A non Dolby Atmos soundbar such as 2.1 or a 5.1 channel soundbar should cost you under $300, you can probably get one for around $150, so they’re definitely more affordable compared to their Dolby Atmos Counterparts.

People often go for non Atmos soundbars simply because they want something better than their standard TV speakers, maybe they’re not as enthusiastic about home theaters, so a 2.1 or a 5.1 soundbar is a huge improvement for them.

However, if you want something as immersive as possible, and you want to feel completely encompassed in the movie, then you will need a Dolby Atmos soundbar to get the best experience possible.

In conclusion, Dolby Atmos soundbars entirely come down to personal preference. If you’d like an immersive experience, then go for an Atmos soundbar.

But if you’re looking for something better than your standard TV speakers, but won’t break the bank, then a normal Dolby Digital soundbar should do the trick.