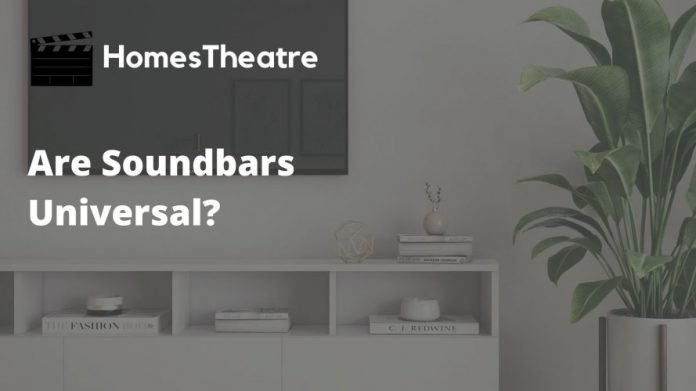 Soundbars are a common topic I discuss with many people, and it always leads to the question whether soundbars must match the brand of the TV.

So naturally, I’ve decided to do my own research because sometimes matching brands does provide some benefit, so I’d like to see where these benefits exist.

However, the answer is always obvious, your soundbar does not need to match the brand of your TV, as long as the two devices are able to connect with each other, they should work.

Most brands will try to upsell you again with one of their products, so if you purchase a Sony soundbar, it’s going to be their job to get you to purchase a Sony TV, and the same applies to Samsung.

I’ve contacted Sony and Samsung representatives on how well their products work with a product that isn’t of the same brand, and they all gave decent information.

Sony’s Word On Matching A Soundbar And A TV

Our Sony representative was pretty helpful, and gave us the answer we were looking for. They mentioned that their soundbars are compatible with different brand TVs as long as there’s an HDMI ARC or Optical connection.

They’ve also made it clear that there’s no features that you’ll miss out on when pairing your Sony soundbar with a different brand TV.

So you should have no problem pairing your Sony soundbar with a Samsung TV. Sony doesn’t lock important or cool features to only their brand.

Samsung’s Word On Matching A Soundbar And A TV

Our Samsung representative made it clear that their soundbars work with any brand of television, however for some of the latest features to work, it’s mandatory for both soundbar and television to have that feature.

So it’s likely that you’ll need a Samsung TV and a Samsung soundbar for certain features to work, but it’s unlikely that the actual performance of the soundbar will be impacted.

An example of a Samsung exclusive feature is Q-Symphony where it aims to improve surround sound performance by allowing sound from both the soundbar and the television.

Similar to BRAVIA Sync, Samsung One Remote is pretty much Samsung’s way of allowing the user to connect any device connected to their Samsung TV.

And the Autopower link functionality is a Samsung exclusive feature where the soundbar will automatically turn on with the television, but you must connect via optical for this to work.

Just like all the other brands, LG soundbars can work perfectly fine with different brand televisions as long as each device has a means to connect, this can be HDMI, Optical or Bluetooth.

However, there’s a LG exclusive feature called LG sound sync that is only compatible with LG products, so your soundbar and television must be LG to use this feature.

LG sound sync makes connecting devices easier by reducing wire clutter, but this doesn’t mean it’s conducive for the soundbar to work with a different brand of television.

So this feature is merely an ease of use feature that takes advantage of Bluetooth technology, this isn’t necessary to get things up and running.

So Do Soundbars Have To Be The Same Brand As The TV?

In most cases, you do not need a soundbar to match the brand of the television. Now, there’s a possibility you’ll miss out on a feature you’ll like, but it isn’t conducive to the soundbars functionality.

Most of the features you’ll miss out on are ease of compatibility features such as making things easier to sync together, this is to make life easier for the consumer.

But if you’re willing to work around these features, then they’re pretty much useless, but they have their benefits. If you have a problem, a representative is likely more helpful if the products are the same brand.

Other than that, we can’t say there’s any notable cons of buying a soundbar and TV of different brands, you don’t lose key functionality of either products, so we recommend going with whatever pair you want.

Brands such as Samsung make curved soundbars, and you’re probably wondering why this is an exception, well this is because curved soundbars are physically incompatible with other curved televisions.

An example is the Samsung HW-M4500 Wireless Curved Soundbar which will only match the curvature of Samsung curved televisions.

Now, if you’re a purely functionality person, then pairing this soundbar with a non Samsung television shouldn’t pose any issues other than the ones mentioned above, but it will look odd, and will probably ruin immersion.

Seamless integration of soundbars and TVs is a crucial and overlooked aspect, when the soundbar integrates well with the TV to the point you don’t realise it’s there, this boosts immersion immensely.

But a flat screen television with a curved soundbar underneath it will quickly become an eyesore, ruin the aesthetics of your home theater setup, and you may even regret your choice.

Choosing Connectors – Does It Matter On The Brand?

When choosing a soundbar and a TV, always ensure it supports the connectors you’re going to use, the most useful and popular connector is HDMI.

HDMI is loved so much because it can transfer both audio and video, and it’s significantly faster, and more versatile compared to optical or Bluetooth.

With soundbars, you’re going to want to ensure that both the soundbar and the TV support at least HDMI ARC, which stands for Audio Return Channel.

On TVs, it should have an HDMI label explicitly stating whether it supports HDMI ARC or eARC right next to the HDMI port, you want to always use this port when using these features.

HDMI ARC isn’t specific to any brand so it should work just fine with different brand soundbars and TVs. The biggest benefit is that you can use almost any HDMI cable for HDMI ARC.

With HDMI eARC, the same rules apply, make sure both TV and soundbar support this technology, but the caveat is that you cannot use any HDMI cable. Ensure your HDMI cable supports ethernet, or is ultra high speed.

Also Read: Why Do Soundbars Have HDMI Ports

How To Connect Soundbar To TV

Actually connecting your soundbar to your display is simple, it doesn’t matter on the brand, and the steps remain consistent throughout.

There’s really only three ways you can connect your soundbar to your TV, and that’s through HDMI, Optical, or Bluetooth, we recommended HDMI for the best support.

Here’s a quick guide on connecting your display to your 4K TV:

What Is Dolby Atmos – Is It Brand Exclusive?

As mentioned above, Dolby Atmos is an object based surround sound format, but what does this actually mean? Well, it’s important to look closely at soundbars and channels.

Your soundbar will come with a set number of channels which can be seen as an individual speaker, or a group of speakers that work in conjunction.

But where does Dolby Atmos come into play with this? Well it doesn’t, at least with these types of soundbars. Dolby Atmos supports height channels which was not mentioned quite yet.

A 5.1.2 soundbar is quite similar to a 5.1 soundbar, but the last number (2) represents the upfiring channels, this is where Dolby Atmos comes into play.

Upfiring channels on a soundbar will bounce audio waves off the ceiling to give the illusion of sound coming from above. This is what we call 3D audio, and Dolby Atmos is the main supporting format for this.

Now, Dolby Atmos is compatible with all TV brands as long as the TV and soundbar supports HDMI eARC, if not, then you won’t be able to use this feature.

Also Read: Is Dolby Atmos Soundbar Worth It?

Other Compatibility Issues With Soundbars And TVs

If you’re going to be passing video through your soundbar, you must ensure that your soundbar is able to support your televisions native resolution.

For example, if you have a 4K TV, but your soundbar doesn’t support 4K pass through, then your soundbar essentially isn’t compatible with your televisions native resolution, but it’ll still work.

What you want to do is look for a soundbar that doesn’t process the signal you’re passing through it, this is called 4K pass through, and it should send the raw unprocessed data straight to your TV.

Pass through preserves audio and video stream, so if you want the most out of your 4K TV, you’ll need to confirm with the soundbars specs that it supports 4K pass through.

In conclusion, your soundbar does not need to be the same brand as the television for the soundbar to function as intended, this includes all critical features.

However, you may miss out on some smaller less important features such as HDMI CEC, but this isn’t of utmost importance for the soundbars functionality.

When buying a soundbar, the features I’d focus more on are physical compatibility, HDMI support, surround sound format support, and other features such as dialogue enhancement.