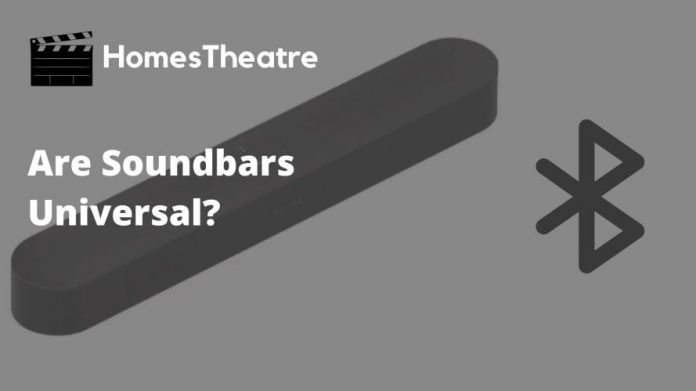 Soundbars are amazing additions to your home theater, and there’s many ways to connect them, but do they support Bluetooth?

You’ll find that most soundbars will connect with HDMI, or optical, but do they support a wireless connection to reduce clutter, and improve aesthetics?

Well the answer is yes, most soundbars will support Bluetooth, but Bluetooth isn’t the best option for connecting a soundbar, and you’ll actually lose certain features.

How Does A Soundbar Work

A soundbar works by emulating the surround sound experience by having speakers or many working in conjunction in channels.

So a single channel on a soundbar can consist of one speaker, or many working together. Soundbars can have between 2 and 11 channels.

A 5.1.2 soundbar has 5 channels, 1 subwoofer, and 2 upfiring channels. This is the most common form of a soundbar that supports 3D surround sound.

Compared to actual surround sound setups, soundbars aren’t as great, but the benefit of a soundbar is that they’re smaller, easier to set up, and significantly cheaper.

Do Soundbars Have Bluetooth?

The majority of soundbars on the market today support Bluetooth connectivity, and you can use Bluetooth to connect your soundbar to your smart TV, smartphone, tables, and other devices.

Many will use this connectivity option because it’s convenient if you’re moving the soundbar a lot, or you don’t want wires ruining the aesthetic aspect of your home theater.

Do Sonos Soundbars Have Bluetooth

No, Sonos soundbars do not support Bluetooth due to their philosophy of prioritising better sound quality over Wifi.

The only way you can connect your soundbar wirelessly is over WiFi which supports higher data transfer, and better audio quality.

Do Samsung Soundbars Have Bluetooth?

Majority of Samsung soundbars will have a Bluetooth button which you can use to quickly connect your soundbar to a Bluetooth capable device.

The flagship Samsung soundbar (HW-Q990B) supports Bluetooth, but we believe you should use HDMI eARC to take advantage of the upfiring drivers.

Do Sony Soundbars Have Bluetooth?

Same with Sony, they ensure that Bluetooth capabilities are present in their soundbars which allows you to connect your soundbar to your TV or remote.

Also, the Sony soundbars should have a Bluetooth button which you press for a few seconds, this should automatically connect your soundbar to your desired device.

The flagship Sony soundbar (HT-A7000) supports Bluetooth, but it’s a better idea to use HDMI or even optical over Bluetooth for the audio quality.

Do LG Soundbars Have Bluetooth?

LG is another brand that creates soundbars, and the majority of their soundbars will support Bluetooth connectivity.

Just like Sony and Samsung, for quick and easy pairing, LG soundbars should come with a Bluetooth button which you press to initiate pairing.

The flagship soundbar (LG SN11RG 7.1.4) also supports Bluetooth, but we don’t think you should use Bluetooth for a soundbar of this caliber.

Should I Use Bluetooth With My Soundbar?

Using Bluetooth has the potential to be more aesthetically pleasing, and significantly easier to set up, but this doesn’t mean it’s a good idea if you want the best out of your soundbar.

For performance, Bluetooth falls significantly behind HDMI, and presents problems most wireless connections have which is instability. This can be detrimental to the immersiveness of your home theater setup.

Bluetooth is far significantly behind HDMI ARC in terms of carrying high resolution video, and high bit rate audio, this means you’re losing a lot of performance from your soundbar.

However, Bluetooth is definitely the better option compared to optical, this is because Bluetooth can carry Dolby Atmos signals.

How To Connect A Soundbar Using Bluetooth?

This allows other Bluetooth enabled devices such as the TV to discover other devices in discoverable mode, this is how devices connect with each other.

Secondly, you need to ensure that your soundbar is within 30 feet of the TV, this shouldn’t be too difficult as the soundbar is meant to go directly underneath the TV.

How To Connect TV To Soundbar By Using Bluetooth:

What Other Connections Are There?

There are many different connection options for soundbars which you should definitely consider. Bluetooth should only be considered if you’re going for aesthetics, or don’t have any other means to connect to your TV.

HDMI is considered the best method of connecting your soundbar to your TV, this is because it supports higher bandwidth for audio and video.

With HDMI ARC, you don’t have to worry as much for cable clutter as it reduces the number of necessary HDMI cables to only two (One for input, and one for output).

HDMI also allows for surround sound formats such as Dolby Atmos(HDMI eARC only) to be transmitted over the cable. Optical cable doesn’t support this, which makes HDMI significantly better.

Also Read: Why Do Soundbars Have HDMI

Optical cables are good at relaying sound, but they cannot transmit video, and cannot transmit surround sound formats such as Dolby Atmos. This makes it fall behind HDMI.

However, Digital optical cables can transmit Dolby Digital signals, so if you have no intentions on using 3D sound, then optical can be a great alternative to Bluetooth.

Due to optical being wired, this means it will be significantly more consistent than bluetooth at transmitting audio. Some even say optical is better than HDMI at sending audio, so it’s definitely a good option.

In conclusion, most soundbars will support Bluetooth, and if you intend on connecting your soundbar via bluetooth, just ensure that your TV supports bluetooth connectivity.

Secondly, Bluetooth is great for reducing clutter, but for raw performance, we’d have to go with HDMI due to it allowing for higher data transfer, and allowing for height channel support.