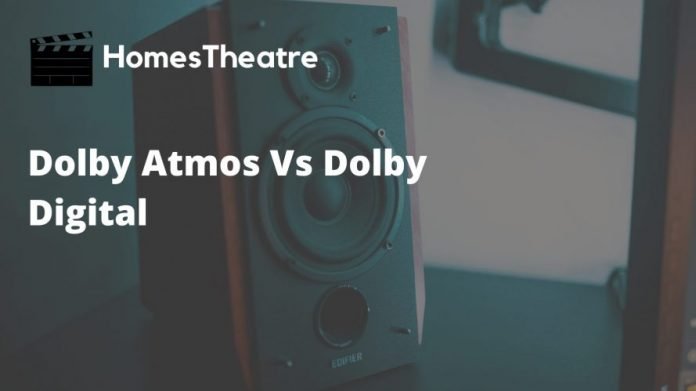 You’ve probably noticed when setting up a surround-sound config, or buying a soundbar that there are surround-sound formats called Dolby Atmos, and Dolby Digital.

Dolby Atmos is considered one of the most influential surround-sound formats for its wide support, and its amazing capabilities when it comes to delivering a high-end cinematic experience.

Dolby Digital is a multi-channel audio delivery system that aims to produce a surround sound experience on a single dimension.

Dolby Digital can only pass up to 5.1 channel audio with bitrates of around 384-640 kbps, and Stereo audio at 192 kbps. The Dolby Digital signal can be passed through an optical cable as well as HDMI ARC, and eARC cables.

For Dolby Atmos to work effectively, you need at least two height channels to get the full experience you’re paying for. Unlike Dolby Digital which only works on the horizontal plane, Dolby Atmos works on both Horizontal and Vertical to produce a true 3D surround-sound experience.

So if you have a surround-sound system, you will have to place speakers above the viewers, and in the case of a soundbar, it will need at least two upfiring drivers for it to work effectively.

Just like Dolby Digital, Dolby Atmos signals can only be passed through HDMI ARC or eARC cables.

Also Read: Are Dolby Atmos Soundbars Worth It

Dolby Atmos is better than Dolby Digital due to it being newer and has more advanced surround-sound capabilities such as supporting three-dimensional surround-sound instead of two.

If you’re building a home theater, you must understand that both Dolby Digital, and Dolby Atmos are both mutl-channel surround-sound formats. One format (Dolby Digital) expects all channels to be on the horizontal plane, whereas Dolby Atmos expects at least two height channels.

In terms of setup, Dolby Atmos wins this one due to the height channel advantage.

The sound experience on Dolby Atmos is far superior because it allows for object based sound which basically works like coordinates. If there’s a fly on the screen, that fly will work as a sound object, and you’ll be able to place it in three dimensional space.

With Dolby Digital, you don’t have this level of control over where the sound is coming from, you’re only limited to horizontal speakers and can only work on a two dimensional plane.

In conclusion, Dolby Atmos provides immense control over where audio is coming from on the screen. Sounds on the screen are object based and can be placed anywhere in three dimensonal space, this provides a superior surround-sound experience.

Dolby Digital only works on two dimensional space, it can work if you’re looking to build an affordable surround-sound setup without height channels.