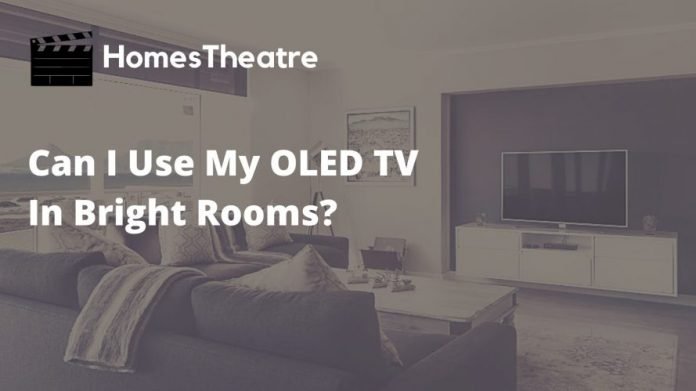 Sometimes watching TV in a bright room can be distracting as a room with a high ambiance light can ruin the quality of video being shown on screen. This is because light can actually wash out the image causing it to look like a mirror. Some TVs suffer from bad reflection handling.

OLED TVs are known for being best used in dark environments such as home theaters and dark living rooms, but how do they fare in a room that gets a lot of light? That’s what we’re going to discuss today, it’s great to know what the best type of TV is for bright rooms, and if you can use OLED TVs in a bright environment to save you from making a bad purchase.

In this post, we’re going to discuss whether direct sunlight will be a problem for OLED TVs, Can OLED TVs get bright enough, and what are the implications of an OLED TV running at full brightness most of the time, and QLED Vs OLED for bright rooms. Hopefully, by the end of this post, you’ll know exactly what to do next.

Answer: In short, yes OLED displays are able to be used in bright rooms, but this doesn’t mean you should. OLED displays aren’t able to get bright like QLED displays, and they often suffer degradation when in direct sunlight. For More Information, You Can Check Out: Are OLED TVs Fragile: Reliability & Lifespan

Will Sunlight Affect My OLED TV?

It is extremely important to discuss the effects sunlight and especially sunlight has on your OLED TV. Sunlight will almost always cause problems for your OLED display and in many ways. OLED TVs consist of sensitive internals, and heat caused by the sunlight can damage the organic material within your OLED display.

This is because OLED TVs are extremely sensitive to heat, and usually, you’ll see somewhere that OLED TVs should not be placed over a fireplace. Additionally, ultraviolet from the sun can cause issues to your OLED display, so in the morning, it’s probably best to close the curtains because even when off, the TV can absorb heat from the sun.

The heat from the sun accelerates the degradation of the organic material within the TV. It will also push your TV to run at full brightness all the time, you’ll likely experience burn-in extremely quickly compared to an OLED display used in a friendly environment.

There is plenty of anecdotal evidence on forums explaining how sunlight has ruined their OLED TVs, and it’s likely true as the organic material within the OLED display is fragile, and complex production methods are used to protect the organic material from moisture and heat damage.

Do OLED TVs Get Bright Enough?

In terms of specifications and capabilities, most OLED TVs can handle bright room scenarios, but you shouldn’t use your OLED TV for this because it isn’t made for it. It’s like driving a supercar in traffic, you have all this potential that you’re not utilizing, and features such as HDR will suffer for it.

OLED TVs shine bright in dark rooms, this is where they function the best, QLED TVs are able to get brighter as they use different illumination technology (LED backlights). OLED TVs use self-illuminating pixels which are great for HDR(infinite contrast), but they aren’t able to output as much light as an LED backlight.

Another potential downside to using your OLED TV in a bright room is that the display will sense it’s in a bright environment and automatically push the brightness of the screen to compensate. This can actually reduce the lifespan of the display, and speed up burn-in and image retention issues.

No one wants to spend thousands on a high-performing OLED display like an LG C2 for it to look underwhelming in bright rooms, and on top of that, suffer a reduced lifespan. While it can work in a bright room, it’s just not recommended and may cost you more money down the line.

Even for SDR content, your screen will be running at max brightness which is completely unnecessary and damaging to your screen. In dark rooms, your screen will only run at 100% for HDR-enabled content which can massively improve your viewing experience.

But an example of a well performing OLED display would have to be the Sony a80j, it was recorded to reach a peak brightness of around 962 nits. While this is significantly lower than the recommended 1500 nits for bright room viewing, it’s still enough for you to get a decent experience out of it.

Most OLED displays aren’t able to get this bright for example, the LG A1 reaches a peak brightness of 500 (nits), and this falls behind the LG C1. Although we have to say the reflection handling is pretty good, it reflects 2% of all light, but the LG C1 reflects approximately 1.4% of all light.

What Are The Best TVs For Bright Rooms

So, we’ve just established that OLED screens aren’t best for bright rooms and are better suited for dark rooms. But if you’re dedicated to getting a screen for your bright room, then a QLED TV will be better suited for this task. This is because QLED TVs are able to get brighter than OLED TVs and generally aren’t as fragile.

Using an OLED TV in a bright room is a complete waste of money and it will bottleneck its true performance, and on top of that, it’ll cause damage to the screen. It’s almost like QLED displays were designed for bright rooms. QLED displays aren’t susceptible to burn-in, so you can watch it at full brightness as long as you want. Additionally, QLED displays quantum dots are far more durable than the carbon-based film that OLED TVs use.

Many Samsung QLED TVs come with built-in anti-glare technology which is beneficial, but if your TV can get particularly bright like a LED TV, but suffers from glare, then an anti-glare TV film for your TV may do the trick. This is a cheap and cost-effective way to convert your LED TV into a bright-room capable display.

Also, the LG C1 handles glare particularly well, and it can also get pretty bright (800nits) with HDR. So, with bright room viewing, the LG C1 may outperform other lower tier OLED TVs. Additionally, the LG C1s reflection handling is top-tier, so it handles glare better than most OLED displays thanks to the anti-glare technology built in.

If you’re looking for a TV that is capable of working in a bright environment, then a Samsung QLED TV can do the trick. Also, if you have an LED TV, applying an anti-glare film to the screen can be cheap and effective at reducing light glare and reflections.

If you’re stubborn about using your OLED TV in a bright room, then try to reduce the amount of sunlight hitting the screen as sunlight is detrimental to your OLED display. The heat from the direct sun will accelerate the degradation of the organic material, and the ultraviolet rays will cause tinting to the screen too. Dewayne - November 20, 2021 0
OLED displays are one technology used to display an image on a TV, and it isn't cheap in comparison to QLED and other types...