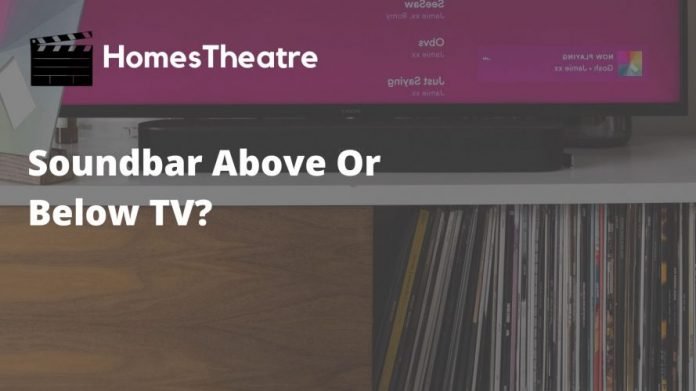 The location of your soundbar is important for getting the most out of it. Whether the soundbar goes above or below the TV, it’s best to choose whatever gives you the best audio experience.

The most common placements for a soundbar are placing it directly underneath the display, or wall mounting it above the TV, so is it worth extra effort mounting it, or should you keep it below the TV?

Well, the truth with placement is that it depends, in some scenarios, mounting a soundbar above the TV will be better, and such a scenario would be if you have multiple seating tiers or upwards firing drivers.

Positioning The Soundbar – The Fundamentals

Fundamentally, for the best experience from a user perspective, the soundbar should be placed at ear level. With that being said, for most individuals, it’s better to place the soundbar under the TV as that’s closer to ear level.

A second fundamental rule you should follow is you should never block, inhibit, or suffocate the soundbar in any capacity as this can have detrimental effects on the performance of it.

Blocking/inhibiting the soundbar usually means placing it in such a way that the speakers cannot project the sound effectively due to it being blocked or absorbed by another object.

Suffocating the soundbar is also related to placement, it’s important to let the soundbar breathe, so you should aim to have it in an open area instead of placing it in a place like a cabinet where heat can build up due to many factors.

Why Placing The Soundbar Below The TV Is A Good Idea

Placing the soundbar below the TV is one of the easiest, and most effective ways to use your soundbar, and for most individuals, this should be the only way you use the soundbar.

Below The TV Looks The Best

For one, below the TV is arguably more aesthetically pleasing compared to having it mounted above the TV, it’s able to blend in more with the TV seamlessly without becoming an eyesore.

But it’s important to understand, if you want your soundbar to look aesthetically pleasing under the TV, you need to pick up a soundbar that is slightly smaller in width to the TV.

Secondly, having the soundbar below the TV is superior for immersiveness, and audio performance, this is because underneath the TV is closer to ear level in a typical home theater config.

This has the added benefit of having the sound travel directly to the viewer without losing intensity. There is also no sideway scattering or sound bouncing off the ceiling which can result in echoes, so it delivers cleaning sounding audio.

Below The TV Is Easier To Set Up

Thirdly, below the TV presents itself with an underrated benefit and that is easy wiring. All the cabling necessary for getting your soundbar up and running are closer to the bottom of the display, so it’s easier to insert the power cable, the HDMI cable.

Also, when you mount the soundbar above the display, hiding the wiring becomes substantially more difficult due to them being more exposed. With the soundbar under the TV, you almost don’t have to do anything to make everything look nice.

You Don’t Have To Mount It

And finally, actually setting up the soundbar is way easier if you choose to place the soundbar below the TV. It’s as easy as placing the soundbar on the TV stand, hooking up the wiring, and you’re one.

On the contrary, mounting a soundbar above the TV presents itself with the problem of mounting, and for some individuals, mounting can be a pretty tedious task.

Now, if your TV is mounted, and you don’t have a TV stand, then you may have to mount the soundbar below the TV as well, but it’s still better for wiring.

An important aspect that tends to get overlooked with soundbars is how you’re going to control it. When the soundbar is below the TV, it’s pretty trivial.

A remotes’ infrared beam works best when there’s a straight path to the destination, so if the soundbar is mounted below the TV, you don’t have to adjust how you aim the remote.

On the contrary, if the soundbar is mounted above the TV, then you’ll have to adjust your aim a lot, and hold the remote above your head which can get pretty annoying.

Why Placing The Soundbar Above The TV Is A Good Idea

Placing the soundbar above the TV is unusual, it’s not something that is practiced a lot due to its limited use, however it does have its reasons for being implemented.

It’s also the safer option because it’s away from pets, kids, and people that can cause potential harm to the soundbar. For this reason, mounting a soundbar above the TV may result in it lasting much longer.

We all know that pets, especially cats, love to climb onto things and sometimes push or pull important things. A pet may trip over a wire and cause significant damage to the soundbar. So above the TV will prevent this.

Dogs also love to chew on wires which can cause significant harm not only to your soundbar, but can be dangerous to your pet dog. So above the TV is best at keeping your dog and soundbar safe.

Or, we all have that friend that loves to spill drinks, your soundbar will be well protected from accidental spillage which will definitely cost a lot of money.

Secondly, soundbars with upfiring drivers such as the Q990B which uses Dolby Atmos may perform better closer to the ceiling. These types of soundbars bounce and reflect soundwaves off the ceiling to give the effect of 3D sound, so above the TV may be better for this.

It’s important to ensure that the soundbar isn’t too close to the ceiling because this has the potential to diminish the sound quality as the majority of the sound will get absorbed instead of reflected.

Home theater setups can use a tiered seating setup where rows of seating are arranged in a sloping pattern. So individuals behind should be able to see above the heads of the individuals in front.

With multiple tiers of seating, having the soundbar above the TV is a way to create a balanced listening environment for everyone.

There are some placement options that are deemed bad as they block speakers which can inhibit the listening experience for the viewer.

These options should be avoided at all costs if you’re looking for the best experience possible, some of these options can even be bad for the lifespan of your soundbar.

Placing the soundbar in the cabinet can be detrimental for two reasons, the first reason is because it will block sidefiring and upfiring drivers.

This means if you have a Dolby Atmos or DTS:X soundbar, you won’t be able to hear the soundwaves bounce off the ceiling due to the cabinet absorbing the soundwaves.

Placing the soundbar behind the TV is another horrible option as it completely blocks the front firing drivers, this will make listening to movies and TV shows extremely difficult.

It effectively ruins the immersion of the soundbar as it blocks majority of the speakers. While a cabinet will only block sidefiring and upfiring drivers, behind the TV will block all front firing drivers.

In conclusion, both positions (above and below) have their pros and cons, for example, below the TV is best all round in terms of performance, aesthetics, and setup.

However, above the TV has its advantages in certain scenarios, it can be a great option if you have a tiered seating plan, or if your TV positioning is quite low.

Overall, the goal is to have the soundbar as close to ear level as this will project the most sound to the viewer resulting in the best listening experience.