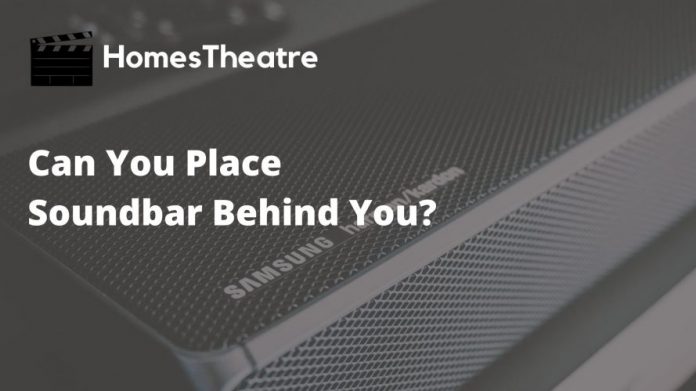 Soundbar placement is crucial for receiving the best audio experience, some may assume that placing the soundbar behind you has some benefits compared to placing it in front of you.

But in reality, every soundbar on the market is designed to be placed in front of you, it’s made to project audio directly to the viewer and simulate surround sound.

So when the soundbar is placed behind you, you’re effectively ruining the immersion as the soundwaves are designed to have a straight path to the viewer.

What Is A Soundbar?

A soundbar can be described as a long loudspeaker composed of many speakers that is made to sit directly in front of your TV.

The purpose of a soundbar is to act as a center channel, and replicate stereo sound or surround sound, this is why they are often used when building a home theater.

Soundbars are also pretty small compared to a true surround sound setup, a soundbar is pretty much a bar that emulates surround sound.

Soundbars Are Meant To Go Under The TV

Placing the soundbar underneath the TV has many benefits, for one, it’s often the recommended placement, secondly, it delivers the best audio performance to the user.

While you may want to place the soundbar behind you may not like the sight of it, placing it underneath the TV can look aesthetically pleasing if you know how to seamlessly integrate it.

Most manufacturers will say in the setup manual that the soundbar must stay in front of the room, either placed below the TV or above the TV.

Reasons You Shouldn’t Put A Soundbar Behind You

As previously stated, wiring the soundbar will be significantly harder, this is due to the necessary cabling being near the TV, you will have to run the cables to the back of the room to get things working.

Acoustically, there’s a high chance that you will encounter perception issues as the soundbar being placed behind you will send the wrong noises to your ears.

Placing a soundbar behind you is a pretty bad idea, but some soundbars especially the high end ones will come with smaller speakers which you can place behind you in a corner.

These smaller speakers are called satellite speakers, and their job is to improve upon the surround sound performance.

And the best thing about satellite speakers is their wireless connectivity, this completely removes the need of wiring them up which makes your life easier.

Soundbars without satellite speakers to place at the rear corners of your room only try to imitate surround sound performance, but these speakers will create a much more realistic and natural experience.

So if you have the idea of placing your soundbar behind you, then you should probably look into mid-high end soundbars that use satellite speakers. A popular soundbar that uses them is the Q990B or the Q950A.

Connecting your soundbar to the TV means you will require a remote control to be able to control the volume, so you’ll be using this remote frequently.

When you use a remote, they work best when there’s a clear line of sight, so this means the device you want to control must be directly in front of you.

When the soundbar is behind you, controlling it will be significantly harder and more annoying as it won’t respond much whilst it’s behind you.

You will find yourself turning around to aim the remote at the soundbar, and the more you do this, the more annoying it gets, so placing the soundbar behind you is bad for remote access.

Alternatives To Putting A Soundbar Behind You

If I cannot change you mind, and you definitely want a speaker behind you, perhaps these other options can help you:

This means you can place speakers behind you to get an immersive listening experience from the back. Most surround sound setups have speakers at the back such as 5.1 and 7.1.

5.1 (or 5.1.2) surround sound setups will have two rear speakers placed in the corner, three front speakers, two in the corner, and one center channel, and one subwoofer.

7.1 (or 7.1.2) surround sound setups will have two rear speakers placed directly behind the seating area, two side firing speakers, and three front speakers, two in the corner, and one center channel. Also it has a single subwoofer.

Also Read: Is Surround Sound Worth It

Or maybe a soundbar is a little too much, in this case, wireless Bluetooth speakers can be the answer you’re looking for.

You’ll have the freedom of moving wireless speakers to the back of the room if you want without having to worry about wiring.

And the good news is that wireless Bluetooth speakers are compatible with a large range of devices, even non smart TVs. As long as your TV has an audio port, you should be able to hook your wireless speakers up to it.

Ensure that the wireless Bluetooth speaker you’re going to buy has a 3.5mm audio port, and ensure you have an audio port cable laying around.

First, the soundbar should never be blocked/inhibited in any way. This is the most important rule you should follow as blocking the soundbar can drastically change the acoustics, and mess with immersion.

Secondly, the soundbar should ideally be at ear level, there’s some nuance, but most individuals will place their soundbar on their TV cabinet which is roughly around ear level.

Acceptable Placement Options For A Soundbar:

Above The TV – Placing the soundbar above the TV maintains two of the fundamental rules which is to never keep it blocked, and never put it in an enclosed space.

Placing the soundbar above the TV is deemed acceptable as it has a few benefits, it balances the listening area if you use tiered seating plans, and it’s pretty safe from kids and pets.

Below The TV – Placing the soundbar below the TV maintains three of the fundamental rules which makes it the best option available.

Below the TV means the soundbar is easier to set up, provides the best listening experience for most users, and it looks the best.

Placed On The Floor – Placing the soundbar on the floor maintains two of the fundamental rules which makes it an ok option if you don’t have the option to place it on a cabinet or mount it.

Placing the soundbar on the floor is acceptable for most beginners as not many have the option of wall mounting, or there’s not enough space on the TV cabinet.

In conclusion, placing the soundbar behind you will cause a few problems which is why it’s not recommended. For one, setting it up is more difficult, controlling via remote is near impossible, and the sound perception is practically reversed.

Soundbars are generally made to go underneath the TV, and project sound directly in front of the listener, so putting the soundbar behind you completely ruins the point.

However, there’s a perfect solution if you want speakers behind you, and you want a soundbar, and that’s to pick up a soundbar that uses satellite speakers. These speakers are made to go behind the listening area to generate a realistic surround sound environment.