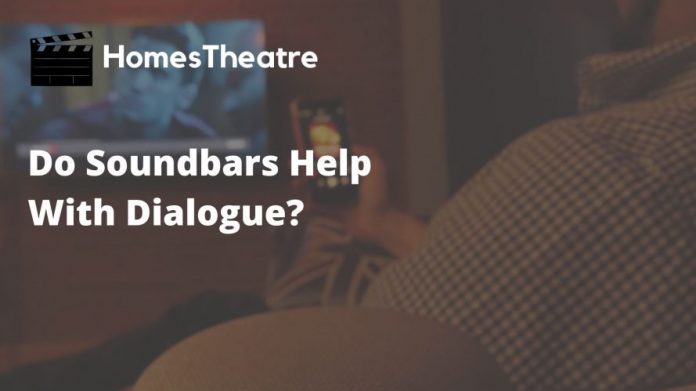 Having a soundbar has the tendency to improve your listening experiences in all realms, this includes surround sound, music, and dialogue. Soundbars are pretty much an all-in-one sound system built for immersion.

And if you’re someone that has a hard time listening to dialogue like men, then a soundbar can actually be the solution, but it isn’t that simple, not all soundbars can reproduce dialogue to a high capacity.

So yes soundbars help with dialogue, but you have to read the specifications and look for a feature called “Dialogue Enhancement” which aims to make dialogue sound crisper and louder.

When you’re watching a TV show or a movie, the dialogue refers to the voices and what people say. And more often than not, dialogue typically contains critical information about the plot, so not being able to hear it can be detrimental to grasping what’s going on.

And a popular problem with TV shows or movies is that the vocals/dialogue can be difficult to hear due to a lot of background effects. Such effects include music, sound effects, and other audio soundtracks that can distort the clarity of dialogue.

Why Is It So Hard To hear Dialogue Without A Soundbar?

The reason why dialogue is so hard to hear without a soundbar is due to the inbuilt speakers in your TV, they don’t prioritize dialogue unlike soundbars do.

Also, it has to do with the channels present on your TV, a smart TV will usually come with 2 channels, this will cause dialogue to be quiet, and the background noise to be overpowering.

This can quickly become annoying as you will have to constantly change the volume based on how the dialogue is, so this is enough to prompt someone to purchase a soundbar which can solve this issue.

Also, some smart TVs will come with a night mode which will minimize intense volume swings, and make hearing vocals a little easier, but in general, this will do little to fix poor dialogue quality.

So, a soundbar is pretty much an all-in-one solution to a lot of problems such as bad dialogue, surround sound, and music. And the huge benefit of soundbars is that you will save a lot of money compared to purchasing a full-on surround sound setup with multiple expensive speakers.

Aesthetically pleasing, soundbars can seamlessly integrate with your display if you know how to place it correctly. Just underneath the TV should be enough for the soundbar to look good, and still provide the benefits of clear, and crisp sounding vocals.

Most soundbars are pretty easy to connect to your TV, and you have a few options to do so. The most popular option would be to use HDMI ARC or eARC, which provides the benefits of Dolby Atmos, and has crisper sounding audio compared to Bluetooth.

HDMI Vs Bluetooth For Dialogue – What’s Best For Sound Quality?

HDMI is arguably the best port to use if you’re looking for the best sound quality, it’s even better than Bluetooth due to it being more stable, and transferring more data.

HDMI allows for higher data transfer, higher resolution transfer, and higher audio transfer speeds which means it has a huge impact on how well dialogue will sound.

Out of HDMI ARC and eARC, they’re both pretty good at providing the user with the ability to connect their TV to the soundbar without having too many cables, but eARC is slightly better when it comes to audio transfer speeds, and it’s also backward compatible.

Connecting and installing your soundbar to your TV involves two steps, one it involves placing the soundbar correctly, and then it involves using the appropriate connectors to get everything up and running.

One thing you should note, if you’re connecting your soundbar to the TV via HDMI eARC, then everything above applies, but you need to ensure that you have a specific type of HDMI cable.

Only HDMI High speed with ethernet and HDMI Ultra high speed can support HDMI eARC, this is due to older cables’ lack of the bandwidth to carry high resolution and high bitrate audio.

Also Read: Why Do Soundbars Have HDMI

If your soundbar supports Bluetooth, then you can use the Bluetooth wireless technology standard to connect your soundbar to your TV, and the best thing about Bluetooth is that it’s cableless.

Really, that’s the only benefit of connecting your soundbar via Bluetooth, in other words, you lose all the benefits of high bit rate audio, high-resolution image, and high frame rate image that HDMI provides.

Due to this, connecting with Bluetooth isn’t ideal for soundbars as you’re not getting the maximum potential out of what you’ve paid for. Additionally, the lower sound quality may actually be detrimental to hearing dialogue when watching TV shows and movies.

What Are Dialogue Enhancing Features?

If you’ve been looking for a soundbar, you may have seen a term called “Dialogue Enhancement”, and what this is referring to is the ability to enhance the clarity of the vocals by increasing it in volume without raising the overall volume.

And the huge benefit of this feature is that the user has full control over it, so if you’re watching a TV show and you cannot hear the dialogue correctly, you should be able to press as “Dialog enhancement” button to instantly clarify the vocals on screen.

Not all soundbars will come with this feature so it’s important to do your due diligence when searching. But if I were to recommend you a soundbar that is great in this regard, then the Sonos ARC would have to be a great pic.

In conclusion, soundbars absolutely do help with dialogue and they can do this in a few ways. The first way is by having enough channels instead of just having 2 channels where the sound is extremely limited.

Secondly, some soundbars will come with a dialogue enhancement feature which will allow the user to control the intensity of the vocals by the press of a button, most decent soundbars should come with this feature.