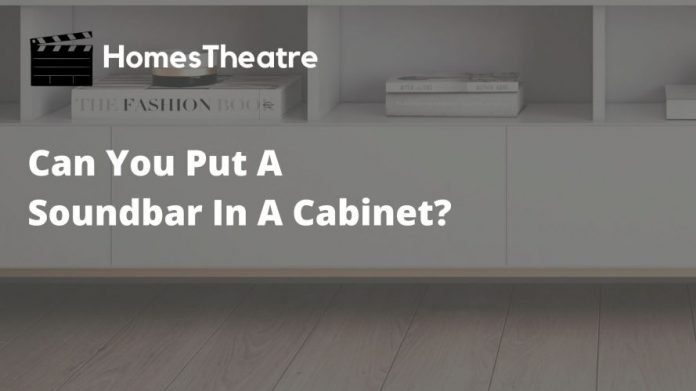 Placing the soundbar in a cabinet has its pros and cons, but there’s a rule a user should always follow, and that’s to to never inhibit the soundbars ability to deliver sound to the listener.

As to whether you can put a soundbar in a cabinet, the answer is yes of course, but there are a few key things you must consider before doing so, or otherwise, you’ll suffer from degraded sound performance.

Putting a soundbar in a cabinet means the cabinet must be open-facing so there are no obstacles blocking the soundwaves coming from the soundbar.

What Happens If You Place A Soundbar In A Cabinet?

While initially the thought of placing a soundbar in a cabinet seems like an okay one due to many other speaker type components playing well in them, things don’t work the same for soundbars.

First we need to understand the purpose of a soundbar, and how they work. The soundbars job is to reproduce surround sound, and deliver an immersive sound experience, and it does this by simulating surround sound.

If the soundbar is placed inside a cabinet, even if it’s an open faced cabinet, the surround sound performance will be degraded due to soundwaves getting tapped, and bouncing off the cabinet’s walls.

Your goal with a soundbar is to allow the soundbar to bounce soundwaves off your rooms walls, and the ceiling which will hit the viewer giving off an immersive experience.

While placing a soundbar inside a cabinet wont stop it from working, you should still be able to hear, the problem is, you’re going to sacrifice a lot of the performance which you’ve paid good money for,

How To Make A Soundbar Work In A Cabinet?

If there’s no changing your opinion on placing the soundbar in the cabinet, there’s a few tips we can give you to allow it to work as well as possible.

Placing the soundbar within the cabinet is easy, most cabinets should allow for a soundbar to fit within them, but the thing is, a soundbar requires a lot more space than you think.

The cabinet needs to be spacious and allow the soundbar to breath for two reasons.

The soundbar needs space to effectively send out soundwaves, if it’s claustrophobic within the cabinet, the soundwaves will have no way to travel.

The cabinet needs to provide enough space to house the soundbars cabling, not many cabinets can do this.

A small enclosure is detrimental to a soundbar, it can cause a soundbar to overheat in many ways, and we’re going to explain to you why heat is really bad for soundbars.

The soundbar will naturally generate heat, some soundbars require up to 1200 watts of power which will definitely cause things to get toasty and heat up.

Secondly, the soundbar will produce a lot of soundwaves, and when soundwaves are absorbed, it will naturally build up heat, so with all these factors together, it can cause the soundbar to work at abnormal temperatures, and skew the thermals.

The reason you don’t want your soundbar to work at high temperatures is because heat is the number one reason why electronics fail, this is because heat causes key components such as capacitors to expand and potentially blow.

Why You Shouldn’t Place A Soundbar In A Cabinet

Sound waves are pretty much a physical force that are transmitted by compression waves through a medium such as air. Air is the perfect medium for sound to travel through, but solids such as cabinet housing can ruin the immersion.

The problem is that a very specific type of soundbar could work fine in a cabinet with minimal degradation to sound, these type of soundbars only have front firing drivers.

A 2.1 soundbar in theory should work fine within a cabinet due to them having no sidefiring and upfiring drivers which can potentially be blocked by the architecture of the cabinet.

However, if you have a 5.1.2 soundbar that comes with sidefiring and upfiring drivers, then a cabinet will be detrimental to the sound quality as there’s no possible way of allowing the sound to escape without altering the cabinet in some sort of way.

Best Placing Options For A Soundbar

The soundbar should always be close in size to the width of the TV, slightly smaller is always better than slightly bigger, this has aesthetic advantages as well as practical advantages.

All the placements mentioned above all have their pros and cons, but there’s one thing in common, nothing is obstructing the soundbar in any capacity such as a cabinet which means it’s free to work to it’s maximum potential.

Worst Placement Options For A Soundbar

Now that we’ve discussed the best placement options, it’s time to discuss options which should be avoided if you’re looking for maximum performance.

The common theme with the placements above is that there’s always something in between the listener and the soundbar blocking or inhibiting the soundbar. For a home theater setup, this is the last thing you want as immersion is one of the top priorities.

In conclusion, placing the soundbar inside a cabinet isn’t ideal, but there are scenarios where it can be possible, and justifiable. Maybe you have no other place to put it, and you’re reluctant to place it on the floor due to possible damage, or you have a soundbar with no sidefiring and upfiring drivers.

Besides from that, the rules you should try to follow to the best of your ability is to never block the soundbar drivers, allow for ventilation, and always have enough space for cables.