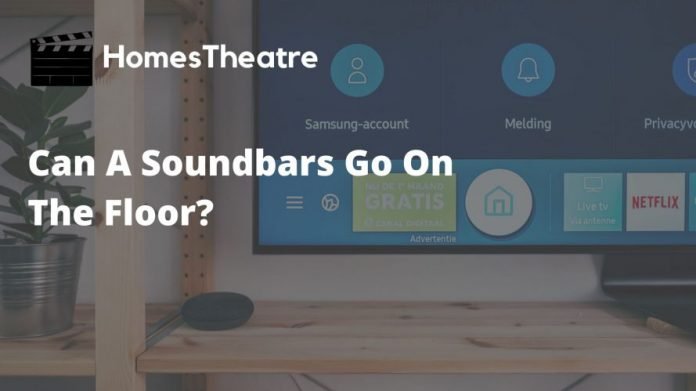 A soundbar is sought after because of its size and robust acoustic capabilities. Due to its size, you can place the soundbar in a lot of places, and the floor is one of those places that are discussed a lot.

Some believe that placing the soundbar on the floor is a great idea, so we’re going to be analyzing that idea in depth, and discussing alternative placement options.

In short, placing the soundbar on the floor is pretty common as not many people have the option of mounting the soundbar, or enough space to put it on a cabinet.

As a beginner, it’s pretty easy to miss the fundamentals when placing a soundbar, so I find it critical to discuss these facts before we talk about placing the soundbar.

There should be no objects blocking a soundbar directly, this is because it will absorb the sound, and ruin the immersion. Ensure that the side firing and upfiring drivers have a clear path to the walls.

Lastly, placing the soundbar at or close to ear level is considered the best way to get an immersive experience, this is why you will see the soundbar placed just underneath the TV, either mounted or placed on a cabinet.

Is It Ok To Put A Soundbar On The Floor?

Yes! We believe placing the soundbar on the floor is perfectly ok, many soundbars will have features in place that will improve the sound quality based on your room’s parameters.

Soundbars will employ room correction, and sound enhancement features to automatically calibrate the soundbar to work in many different types of rooms and placements.

For this reason, it’s important to consider your options before you place it on the floor, and employ precautionary measures to ensure that it doesn’t get damaged in the process.

Where On The Floor Can A Soundbar Go?

Also, having the soundbar on the floor underneath the TV is convenient as it allows you to hook up all the necessary wiring such as the power cable, and HDMI cables to the soundbar.

You don’t want to put the soundbar on the floor behind the listening area as this could block & distort sound, and make it incredibly hard to control the soundbar via remote.

So, you want your soundbar in a place where the soundwaves are free to travel without interruption for the best listening experience possible. And ensure any upfiring and sidefiring drivers can bounce off the ceiling and walls to produce an optimal surround sound experience.

For more information on placing the soundbar, the manufacturers will usually have the best placement options inside the manual, but you can find the optimal place by utilizing trial and error to see where the soundbar sounds the best.

If possible, raising the soundbar even a little bit by using an object to prop it up can be beneficial for sound performance especially if you have a Dolby Atmos soundbar.

Instead of placing the soundbar on the floor, here are some of my favorite options that I recommended, and I believe in my own experience that they are better than placing it on the floor.

Placing The Soundbar On A Cabinet

Placing the soundbar on a cabinet is probably the most common placement option, it performs to a high standard, it looks aesthetically pleasing, and it’s easy to set up.

Cabinets will have a soundbar slightly below or at ear level which is perfect for acoustics and hearing all the sound frequencies. This fact coupled with the soundbars ability to use room correction makes for a pleasurable experience.

When it comes to placing the soundbar on a cabinet, it’s ideal to have the soundbar slightly smaller in width than the TV, this makes for a more seamless and more aesthetically pleasing integration of the soundbar.

If you’re willing to spend the time drilling holes and setting up the mounting equipment, then you should definitely consider mounting the soundbar because it definitely outperforms a soundbar that is placed on the floor.

It is objectively safer as it’s out of the way from pets and uncareful people. This means your soundbar pretty much has a longer lifespan whilst mounted compared to if it was on the floor.

You also have the option of mounting the soundbar above the TV, while it’s unconventional, it does have its uses in home theaters with tiered seating plans.

Also, having the soundbar mounted above the TV is objectively the safest placement as it’s even harder for people and pets to get close enough to damage it.

There are some truly bad places for your soundbar that should be avoided. Some people may like these placement options, but personally, they offer little benefit, and will even harm your listening experience.

Placing The Soundbar Behind The TV

One of the worst places for a soundbar is placing it behind the TV, there is honestly no benefit to doing this as it just ruins how the soundbar sounds, and it can be quite dangerous.

Placing the soundbar behind the TV will absolutely ruin the immersive experience, and it can even distort and ruin how the sound is meant to be perceived.

This is because for one, the sound will be absorbed by the TV, and secondly, it can cause the soundwaves to bounce in directions they are not meant to go.

If you’ve ever used a soundbar, you may have noticed how it can move on its own when used, this is due to the vibrations generated when it produces sound. If the soundbar vibrates backwards, it can potentially fall and damage it, for this reason, behind the TV is arguably more dangerous.

Placing The Soundbar Inside An Enclosure

Having a soundbar in some sort of enclosure is a bad idea because it can block speakers on a soundbar that is crucial for the listening experience.

The last thing you want to do is block a set of speakers because sound waves generally act as a physical object, and if it’s blocked, it will behave as such and deliver a less impactful experience.

With that said, a common enclosure used by people is a cabinet, and placing the soundbar in a cabinet can block sidefiring and upfiring speakers, but it will allow front firing drivers to work effectively fine.

Besides ruining the listening experience, placing the soundbar in an enclosure can reduce lifespan as it will have more heat build up due to less options to radiate heat.

Placing The Soundbar At The Back Of The Viewing Area

Generally, you will want the audio to come from the part of the screen you are looking at, and soundbars perform this best when they are placed at the front of the listening area.

Also Read: Can You Put A Soundbar Behind You 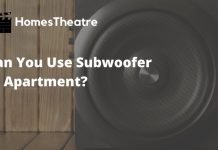 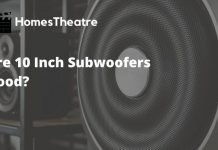 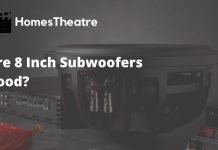