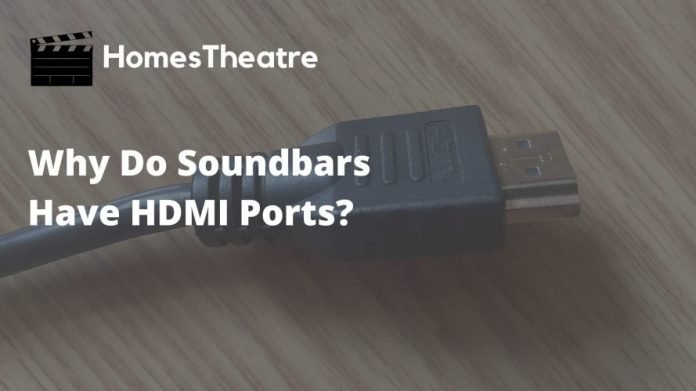 Understanding how a soundbar works can be pretty tricky, especially with the number of different ports they have. HDMI is one of the most versatile ports which is why you may see them on a soundbar.

Now, you’re probably wondering exactly why a soundbar has multiple HDMI ports as did I once, and there’s a good reason for it. A soundbar will often come with 2 HDMI ports, one for input from the program source, and one for output to the TV.

Also, HDMI cables are far better than optical and coaxial cables, this is because for one, HDMI transfer signals at a higher bandwidth, and they can also pass surround sound data such as Dolby Atmos.

How HDMI Works With A Soundbar

HDMI is one of the top standards when it comes to transferring audio and video.

The soundbar will also use the HDMI port to receive the signal from a source, and this source can be anything capable of outputting a video and an audio signal.

Then the soundbar will then output the signal to a possible input device, this can be a TV, projector or anything capable of processing video signals.

HDMI Compared To Other Ports

You’ve probably noticed that your soundbar comes with audio/video ports other than HDMI such as optical and coaxial, and wondered, “What’s the point of HDMI”?

Well to put it simply, HDMI is better than all the other ports and far newer. It allows for higher data transfer and higher resolution transfer, and it can pass streaming formats such as Dolby Atmos, Dolby Vision, and DTS.

And in terms of simplicity, HDMI transfer both audio and video whereas optical transfers only a digital audio signal. However, optical can be useful if all your HDMI ports are being used, or you don’t have an HDMI cable laying around.

HDMI Vs Bluetooth For Soundbars

With HDMI and Bluetooth soundbar connections, there are a few benefits to both, for example, HDMI has higher bandwidth, it’s more stable, supports higher resolutions, and has better sound quality.

But Bluetooth is potentially more aesthetically pleasing, the soundbar is not physically bound by a cable, and it can support Dolby Atmos, unlike optical cable.

But for performance, we absolutely recommend HDMI, it’s better if you’re serious about building a high-performing home theater setup. Everything about Bluetooth is less immersive than HDMI, for example, if the movie you’re watching is on an unstable connection, you’re going to lose the immersion.

Bluetooth does have its place on smart TVs, and it’s so widely supported, that you can find almost anything to fulfill its purpose. Bluetooth can be a great standard for connecting your smartphone, or table so you can use it as a remote for the TV or soundbar,

What Are HDMI ARC and eARC?

Most soundbars will come equipped with this type of HDMI technology, what HDMI ARC stands for is HDMI Audio Return Channel which is needed if you intend on transferring audio VIA HDMI.

Without HDMI ARC or eARC technology, you would actually require three HDMI cables to get everything up and running, so this means you’ll need a separate cable just for the audio, and the two other cables are for the input and output ports.

Once set up correctly, the HDMI ARC or eARC cables should automatically detect an externet audio device such as a soundbar, and automatically send the audio signals to the soundbar instead of the internally built in speakers on your TV.

Okay, So How Do I Connect My Soundbar Using HDMI?

So, connecting your soundbar to your TV using HDMI isn’t too difficult, the most important thing is ensuring that you have all the correct equipment when continuing.

Most cables should be able to HDMI ARC, even some older cables, so if you’re planning on using HDMI ARC, just about any cable you find in your house should work. Only very outdated HDMI cables may pose incompatibility issues, so ensure you assess the cable.

However, for HDMI eARC, you can’t just use any cable, some older cables lack the bandwidth to even carry high resolution, and high bit rate audio, but there are cables you can easily pick up that are HDMI eARC compliant.

Specifically, “High Speed HDMI Cables With Ethernet” & “Ultra High Speed HDMI” are HDMI eARC compliant, and they aren’t too expensive, you can pick one up for less than $10.

The first step would be to connect one end of the cable to any available HDMI ARC or eARC ports on the TV, and then connect the end of the HDMI cable to the OUT port on the soundbar.

And if your soundbar has an IN port which it should have, we will connect any input device such as a game console, Blu ray players, and other streaming devices to it.

In conclusion, HDMI is a new and versatile standard which is used for many purposes, in the case of a soundbar, the HDMI cable is capable of transferring both video and audio which makes it extremely useful.